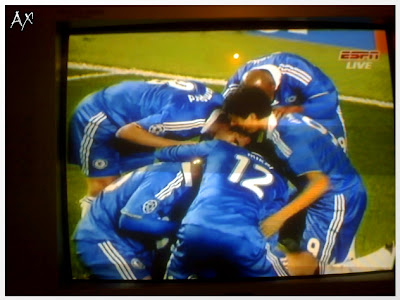 Match reports
The Observer, Jamie Jackson:
"Delight and a return to the top of the table for Chelsea; a thrashing for Sunderland and an enforced seat in the stands for Roy Keane. This was far too easy for the home side. But while the five unanswered goals might seem to make last week's surrender of Chelsea's proud unbeaten run at home faintly unbelievable, there were hints that Luiz Felipe Scolari does need to find differing ways to beat sides who do not just roll over."
Sunday Times, David Walsh:
"There are afternoons in football when you want to find a hole in the ground and disappear. So, perhaps referee Martin Atkinson was being kind to Roy Keane when banishing him to a quiet seat in the stand for the second half of this hopelessly one-sided match. By then Sunderland were losing 3-0 and it really was just a question of how many more Chelsea would score. From his new seat Keane was close enough to a defeat that bordered on humiliation."
Independent on Sunday, Glenn Moore:
"[Sunderland] were outclassed at Stamford Bridge, where it rained cats, dogs and Chelsea goals. Nicolas Anelka helped himself to three of them, taking his season's tally to eight in the League. With Didier Drogba making his return it was a timely treble, though the plaudits belonged to its architects, Joe Cole and Frank Lampard."
Sunday Telegraph, Patrick Barclay:
"Chelsea, to their credit, entertained us handsomely with passing crisp enough to delight their Brazilian manager."
Official Chelsea FC Website:
"The biggest win at Stamford Bridge under Felipe Scolari was a great way to ease concerns about home form, Nicolas Anelka helping himself to a hat-trick with Alex and Frank Lampard, naturally, also on the scoresheet."
The goals
27' Alex
30' Anelka
45' Anelka
51' Lampard
53' Anelka
Player ratings
Petr Cech: Seriously had nothing to do and was probably the loneliest person in SW6 yesterday such was his lack of contact with anybody - 7/10.
Jose Bosingwa: Quality ball control, fabulous wing play. Rubbish corners. No, make that utterly rubbish corners - 8/10.
John Terry: Captain Fantastic. Another who seems to have jumped a level under the Popeye Scolari effect - 8/10.
Alex: Riccy who? - 8/10.
Ashley Cole: Was starting to relish the game until Malbranque thought otherwise - 7/10.
John Obi Mikel: Marvellous. Just marvellous - 8.5/10.
Deco: Great all round contribution but still worryingly apt to play the odd weak pass surrendering possession. I hope he looked at Joe Cole and saw what the fans expect. These two together might just be awesome - 8/10.
Frank Lampard: Looked a little subdued for the first 30 minutes but then came into his own and the first signs of a real understanding with Deco - 8.5/10.
Joe Cole: Terrorised Sunderland and linked superbly with Lamps and Deco - 9/10.
Florent Malouda: I’m still not convinced but am happy to admit I might be missing something. Had two glorious chances close to goal which were easier to score from than miss and completely arsed up a chance when he was clean through and seemingly got stage fright - 7/10.
Nicolas Anelka: See 'The good'. Absolute class - 9/10.
Wayne Bridge (sub): Seriously as good as Ashley Cole. Talk about spoilt for choice - 8/10.
Carlos Mineiro (sub): Are you Makelele in disguise? A promising show - 7/10.
Didier Drogba (sub): A cameo appearance to get some match fitness. Poor first touch, lacked a yard of pace and a little bemused by our new found pass and move style. For a moment it seemed we might be back to lumping the ball forward to him. But still good to seem him on the way back - 7/10.
Man of the Match
Very close between Joe Cole and Nicolas Anelka. Joe went off and Anelka slotted seamlessly into his place and scored three goals, no matter how they go in put him as joint top Premier League scorer. In the end this is what differentiated them. Mr Anelka, you get the vote.
Final thoughts
Keep the Blue Flag Flying High!
*Since LIVERPOOL got defeated by SPURS 2-1,yeah-i have to announced that THE BLUES back to the TOP in the Chart..this is waht we've called the real 'SWEET MOMENTS...'
:D
Posted by @xiM at 7:57 PM